Access to health services in the prison system is conditioned by legal barriers, social marginalization and stigma which can increase infectious diseases among the prison population1.

The prison population is different from other populations and it’s in a situation of increased vulnerability. There are several factors that contribute to this, mainly: more exposure to violence; transmission of infectious diseases; increased unprotected sexual, confinement and overpopulation; difficulties in the patients flow up1.

The number of prisoners in Portugal is about 14.000 on 2017, for a theoretical capacity of approximately 13.000, generating, thus, a panorama of indisputable overcrowding of the prison system. In addition there is also a high turn-over of inmates2. The most relevant characteristics of Portuguese prisoners are summarized in Table 1 and Figure 1. 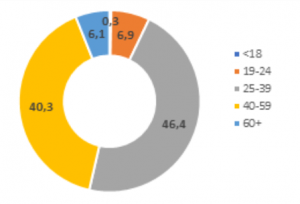 In order to achieve the goals to 2020 outlined on Onusida/Unaids and reduce the morbimortality of viral hepatitis, the General Directorate for Reinsertion and Prisional Services (Direção-Geral da Reinserção e dos Serviços Prisionais) and 28 hospitals of the National Health Service (SNS) will sign a protocol for the treatment of human immunodeficiency virus (HIV) and viral hepatitis infections in the prison population, extending to the whole country the pilot project that runs between the Hospital de São João in Porto and the prison of Custóias.

This pilot project started on january 2017, in order to promote appropriate diagnostic procedures and to provide medication to cure hepatitis C.

This initiative enabled the elimination of Hepatitis C in prisons in Custóias and Santa Cruz do Bispo and is now being expanded geographically and to include other viral hepatitis and HIV4. 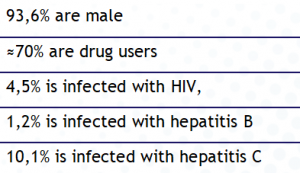 Up until now, prisoners were subject to security procedures when traveling to healthcare facilities, which caused constraints to clinical observation. From now on they will be treated in the prison itself. This new model will allow physicians – infecciologists, gastroenterologists and internists – to move to prisons to care for the HIV-infected, hepatitis B and C prison population of 45 prison facilities across the continent. In addition, screening will be done at the entrance, during and at the end of the sentence.

Thus, it is expected that this protocol will shape a new approach to health care for infectious diseases in prisons.