But they are simply too far into their careers and those feelings and memories are getting harder and harder to recall. Let us all take a minute of mindful meditation to sympathize with our experienced colleagues.

Having an event of such a scale hosted by one of the EuroNet MRPH member countries made a solid case for organizing one of the regular meetings EuroNet members cherish so much in Slovenia. Many residents from EuroNet countries were attending the conference and we could feed two birds with one scone if we organised the winter meeting back-to-back with EPH.

The only problem, if we can put it this way, was that most of the residents planning to come to the winter meeting were experiencing the city of Ljubljana, listening to presentations, and sitting in lecturing halls already for at least 4 days of the EPH conference. We assumed they could use a change of scenery and so we decided to organize the winter meeting in a secluded snow-capped mountain not that far away from our green capital. And so we booked buses, funiculars, chairlifts (yes, chairlifts) to take us up to the mountain called Velika planina where chalets with wood-burning fireplaces awaited us and kept us warm for the 3 days we’ve spent there.

Programme of the meeting had a clear focus on EuroNet inner workings and projects of our fellow residents. General assembly was split in two parts this time. We started the meeting with a dinner and continued with the first part of the general assembly in the same restaurant which happened to be the only closed space on the mountain big enough for 45 people to occupy at the same time. The second day was the day when majority of work was done. First on schedule were pitch presentations where some of the work EuroNetters are involved in was showcased.

Topics covered ranged from surveillance of communicable diseases, public health advocacy initiatives to ethics of vaccine hesitancy. Afternoon sessions kicked off with working groups focusing on internship facilitation, communication and research activities. A new format of session was introduced during the meeting as we conducted the first ever EuroNet-athon (mimicking the well-known hackathon format). Three teams were tackling three challenges of further EuroNet growth identified by a committee comprised of old and new board members. Winner of the EuroNet-athon was announced during the second part of the general assembly.

Even though not everyone followed our advice on warm clothing and footwear we managed to end the winter meeting with 0 casualties. We would even go as far as to say that the winter meeting we held at Velika planina was a big success. The idyllic location and the programme of the meeting had little to do with it.

It was a big success primarily because of the people who attended. And with this in mind we are looking forward to new success stories ahead. Because EuroNet MRPH is nothing more than people that represent it. 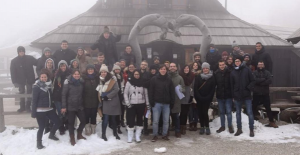